A downloadable game for Windows

Blobkin Blaster VR is a quick breed-em and shoot-em up VR Game. You must defend your blue Blobkin villagers from flying monsters that swoop in from space portals. The catch is your gun is powered by your villagers' lifeblood! In order to defend them, you’ll have to sacrifice them!

This is a Virtual Reality (Oculus Rift, Vive) seated experience.

Shoot Monsters that portal in to protect your village. The Monsters will drop food when shot. Your villagers can eat that food and multiply, giving you more Blobkin to use as ammo.

You can also power a Bubble Dome Generator to protect your Villagers, but that too requires Blobkin sacrifices.

The game ends when you lose all your Villagers

Authors
Theory Studios is a small collective of animators and developers working in AR and character animation. We work virtually, so our team is scattered across the world. Folks on the Ludum Dare 43 team were:

We primarily tested on Oculus Rift, and while it works with Vive, we weren't able to playtest it much on other systems (but we're slowly working to change that!)

There are a few bugs (shooting a Monster while a Villager is in mid-air will leave them stuck, doh!)

Some sound effects are from Digital Juice (splatter), however the music and voices are our own. We also used additional particle effects from RTFX Generator (the poof when the Monsters die). 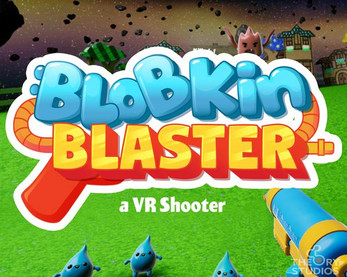